Two Wonderful Girls. One Day At A Time…

The Passion Of A Parent

So if you follow me on Facebook, you probably know the story. After her Uncle Ricky’s visit, Iris really caught the basketball bug and has been dragging me out to the local courts to play. She originally focused on dribbling and passing because she lacked the confidence to shoot, but eventually became addicted to try to score. She’d heave one shot after another, showing a tremendous amount of patience in trying to score that first basket. On the first day, after probably a hundred shots that all missed, many of which came very close, I assumed she’d be dejected. Instead, she made me promise to bring her out the next day. Following up on that promise, we headed out there and she was more determined than ever. As she started getting really close, I realized that the new digital age gave me an opportunity to catch a pretty exciting moment on video. I stepped away from rebounding for her and put the camera on her, certain that I was about to catch her first ever basket on a 10-foot rim. Unfortunately, she kept coming oh so close–only to have the ball fall off the rim. I was starting to lose hope when, all of a sudden, it happened. And yes, I did capture it. I’ll warn you to lower your speakers a little while you watch it.

Yes, I was a little excited. As I watch that video, the shot was great, but everything that happened after the shot is where it really gets entertaining. It was both the unintended by-product of my video recording session as well as Exhibit A on why I’ll never regret being a parent. My outrageous reaction, dead on sprint to her, and huge embrace before even remembering to turn off the camera wasn’t rehearsed. I didn’t think about it ahead of time. All I know is that I can’t remember wanting anything so bad for myself as I wanted that basket for her. And every lesson I taught her about hard work and persistence was embodied in that basket. I was excited for my daughter’s accomplishment. I was excited because a lesson I provided yielded a benefit just like I promised. And I was excited because she and I shared a moment that likely would’ve lived forever in our hearts, even if there was no video documentation of the event. I planned on capturing an important moment in my daughter’s life, but in reality, I was really capturing an important moment in my own.

I took a still picture out of the video that now resides on my phone’s background as well as my laptop background. 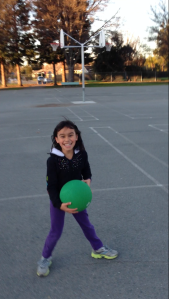 The look on her face says it all. The excitement of achieving her goal. The anticipation of sharing it with a father who was just as excited as her. And being able to say she did something on her own. As a father, I spend every day second-guessing my approaches and lessons. Is this really what she needs? Am I helping make her a better person? Will she thank me for this later? Asking a child for patience is like asking a miser for charity–it’s often not in their nature to surrender it. But Iris did stay patient and in the past few weeks since our glorious moment, I’ve been able to refer back to this lesson. For one day, I nailed the parenting thing–and I have the video to prove it…